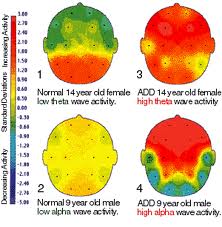 For the longest time, children (and adults) with ADHD/ADD were often pegged with the labels of "lazy", "not living up to their potential", "unmotivated", "stupid" and a number of other harsh and judgmental names that would seem to infer that if the person would just "try harder", everything would be fine.  For those of us with ADHD, we know that it's just not that simple - if it was, we'd have already done it!

In the mid-80's ADHD/ADD was first recognized as a biological imbalance in the brain that seemed to be related to a slowing down of the frontal lobes of the brain.  The frontal lobes are responsible for our executive functions of focus, motivation, organization, certain forms of memory and certain factors of emotional intelligence.  As you might imagine, when the frontal lobes slow down, it can create a lot of problems for a person!

The first approach to treating ADHD/ADD as a biological issue was to speed things up using ritalin and related medications.  For some, this offered relief of their troubling symptoms but it often came at a cost.  Ritalin is a schedule 2 narcotic, in the same family as methamphetamine and cocaine and while it is not nearly as dangerous as these drugs, it still has a list of side effects that should make this a secondary treatment for this condition and not a treatment of choice.  Of course the other issue is that once the medication wears off, the ADHD/ADD comes back again so while it may control the issues, it doesn't fix them.

Still for others, the ADHD/ADD meds didn't help and in some cases, actually made the problems worse!  If anxiety was present with the ADHD/ADD it was worsened by the medication.  Oppositional behaviour was often accentuated by these medications which made them impossible to use for 10% of the ADHD/ADD crowd.

Daniel Amen, MD has spent his life working with special neural imaging called SPECT imaging which allows us to see the metabolic activity of the brain and he found something out intriguing about ADHD/ADD...

There Are 6 Different Kinds of ADHD/ADD! 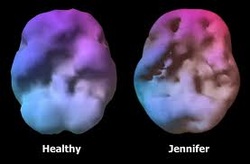 A SPECT scan sample
We highly recommend Dr. Amen's book: Healing ADD - it's superb!  In a nutshell, here are the 6 ADHD/ADD types:
1) Classic ADHD/ADD with frontal lobe slowing.  This is the hyperactive ADD
2) Inattentive ADD with frontal lobe swelling but no hyperactivity.
3) Overfocused ADD.  This is ADD with OCD thrown in!
4) Temporal lobe ADD.  Frontal and temporal slowing leading to explosiveness.
5) Limbic ADD.  Frontal slowing coupled with limbic dysregulation producing depression and ADD together
6) Ring of Fire ADD.  An entirely overactivated and hyper responsive central nervous system leading to opposition and destruction.

In addition to the 6 types that Amen talks about, it's also important to note that many brain injuries present as ADHD/ADD.  These injuries may be post concussion, after a motor vehicle accident and in some cases as far back as from a birth injury!

LENS neurofeedback can not only help us identify the type of ADD we are working with via the brainmap, it can also treat the conditions and provide a permanent fix in many cases!  Your brain can be healed and take on more resourceful and healthy patterns, it just needs the right input to help it correct.  We have seen many cases of people regaining their focus, organizational abilities and memory from this equipment and being able to reduce and in some cases discontinue their medications.
Powered by